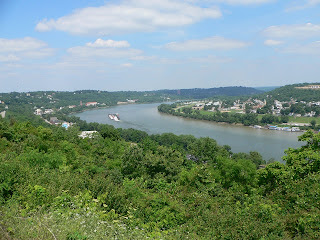 When I was a kid, we had a boat on the Ohio River. Because rivers have bends and curves, it's easy to run aground. When my dad let me drive, he advised me to keep my eyes on a point in the distance and aim for that point. That's been great advise for my life. I want to share some thoughts about the importance of purpose--living a "purpose driven life," and living toward a target. If you don't pick a target, you'll run aground. Your life will be, literally, "pointless." If you state that you have a target, but you're not making decisions to actually get there, you're like an arrow without feathers--flying fast through the air, but not any closer to the target. Living purposefully is one of the most important traits of a successful life and is, undoubtedly, the primary character trait of Jesus and the Apostle Paul.

Matthew 16:21-24 is just one example of Jesus knowing and living toward his purpose. In this passage, he defines part of our purpose; i.e., to follow him.
Mt 16:21-24: From that time on Jesus began to explain to his disciples that he must go to Jerusalem and suffer many things at the hands of the elders, chief priests and teachers of the law, and that he must be killed and on the third day be raised to life. Peter took him aside and began to rebuke him. "Never, Lord!" he said. "This shall never happen to you!"
Jesus turned and said to Peter, "Get behind me, Satan! You are a stumbling block to me; you do not have in mind the things of God, but the things of men."
Then Jesus said to his disciples, "If anyone would come after me, he must deny himself and take up his cross and follow me.
We received our call to Peru in December of 2003. It's been a long haul since then. I knew when 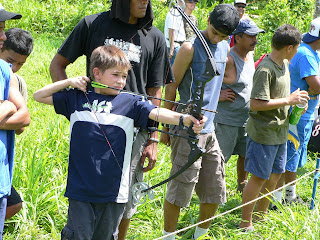 we received the call, that it would be about 4 years before we actually made it to the field. It became a target in the distance and we've been living "toward" it ever since. There are a lot of opportunities to "run aground" in four years. But, thankfully, the Holy Spirit's job is to keep us afloat. I'm grateful that we're now able to see the light at the end of this long tunnel. Lord willing, we'll be in Peru shortly. Purpose, in life, is like the rings of a target. There's often more than one ring--though they all circle around or point to the center point. For us, the center point is Jesus and the advancement of the kingdom by preaching the Gospel. For us, the rings around this center will be working with Latin America Childcare, teaching, preaching, evangelizing, hosting teams and falling in love with the people of Peru.
(The pictures: 1) My beloved Ohio River, taken from Eden Park. 2) Colton shooting an arrow at a Royal Ranger camp-out here in Costa Rica. Shooting an arrow gives you a great idea of how important it is to keep your eye on the target and how easy it is to lose your arrows in the weeds.)
Posted by Bill and Lena Shrader at 10:15 PM