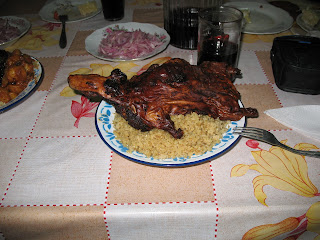 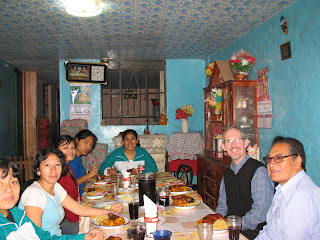 Everyone at the table laughed. I had heard that the head is the tastiest part, but I wasn't brave enough to try it. Apparently I wasn't alone, because when my friend cut it off, she asked everyone in the room if they wanted it and everyone declined.
Posted by Bill and Lena Shrader at 9:37 PM 1 comment:

Hannah turned 14 on Saturday. We celebrated by hosting her friends from school for a cookout. On Sunday morning, she helped lead worship at church. I preached. It's a great feeling to tag team with your teen-age daughter in the ministry! I'm very proud of Hannah. She is as beautiful on the inside as she is on the outside. The pictures here are a little collection of Hannah through the years.

Posted by Bill and Lena Shrader at 6:20 PM 2 comments:

Email ThisBlogThis!Share to TwitterShare to FacebookShare to Pinterest
Labels: Kids, Life in Peru

The Park of Love 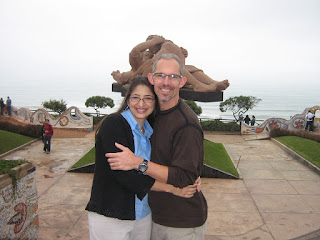 One of the most famous spots in Lima is the "Parque del Amor," which is "The park of love!" It has a statue of a man and woman embracing.

Every Saturday afternoon, couples who are getting married line up in front of the statue for a wedding photo. It's fun watching the couples, all decked out in the wedding garb. You can feel the happiness in the air.

We went with our friends, Mike and Barbara Olejarz--the parents of our assistant Sarah. It was a great day and the perfect opportunity to celebrate love with a passionate smooch! 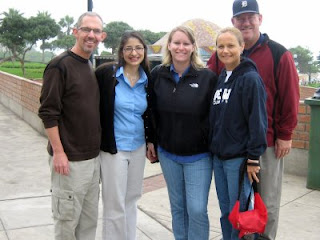 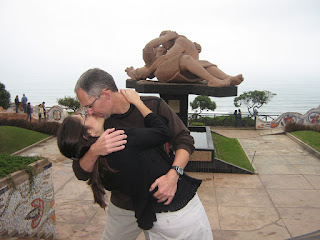 Posted by Bill and Lena Shrader at 6:56 PM 2 comments:

Hurricane Ike & the "goddess of the Sea"

I was looking at photos of Hurricane Ike on the Washington Post web site. Photo #33 caught my eye. It was of Cubans carrying statues that appear to be of Mary. The text alongside the picture says, "Residents of Batabano Surjidero in Havana, Cuba, participate in a procession to request the Goddess of the Sea, the Virgin of Iemanja, to move Hurricane Ike far from Cuba." That's it. People carrying a statue of a woman, praying to an ancient pagan diety. People ask us, "Why go as a missionary to a Catholic country?" The answer is as simple here as it is in the U.S.; i.e., no country is Christian or non-Christian. Rather, people are Christian or not. In Latin America, there is huge confusion because of ancient pagan dieties with Christian names. We're here to clear up the confusion.

There is only one person who has the power to calm the storm, his name is Jesus.

Email ThisBlogThis!Share to TwitterShare to FacebookShare to Pinterest
Labels: Discipleship, Life in Peru

Watching the olympics in Iquitos

Here's a quick little clip of some interesting footage that I didn't include in the previous video.

Posted by Bill and Lena Shrader at 12:46 AM No comments:

In August, I had the privilege of spending 4 1/2 days in the jungle city of Iquitos, where I got to participate in the installation of two water wells at our Latin America ChildCare schools. I took video at each school, this is the first of the two.

Thanks to everyone who is on our team. The whole experience was powerful and I'm so honored to be part of this life changing ministry.