Our Call - The LACC connection

In 1988 Lena had a vision of a mother and child who were Latino. She knew that God was calling

her to minister to women and children, so she applied to work with Latin America ChildCare. They wrote her back saying that they’d love to have her work with them, but that she first had to become a licensed Assembly of God minister. She didn’t feel called to pursue ministerial credentials, so she threw the letter away and put the vision in God’s hands. She believed the vision was from God and she knew that God would bring it about—but she didn’t know how.

In March of 2000 we took some Chi Alpha students on a missions trip to Mexico. While there, we drove through a barrio of what I call “economic orphans.” It was full of kids without parental presence. I asked where their parents were and the missionary we worked with said their parents were migrant farm workers harvesting crops in another state. Then I asked why the kids weren’t in school. The missionary said that the government requires them to pay $50 to buy a school uniform, which their parents couldn’t afford. She said that their parents never went to school, that these kids would never go to school and that their kids would never go to school. Their only hope was to walk around aimlessly until they were old enough to work the migrant fields themselves.

I broke into tears and prayed, “Lord, I beg of you, if you ever move me out of campus ministry, I pray that you will put me in a ministry where we can change the lives of kids like these!”

On Christmas Eve, 2003, we received gifts of alpaca sweaters from Peru (see “Our Call – the Sweaters”). Our friend who gave us the sweaters said, “There’s a message from God in those sweaters.” So, we started praying. Obviously, we wondered if God was calling us to Peru as missionaries, but we were trying to keep an opened mind, so that we didn’t make a presumptuous mistake. A month later, in January 2004, I went to a World Missions fly in (where execs meet with pastors). I asked the Latin America representative what was going on in Peru. He said that the Peruvian Assemblies of God had been begging for missionaries for years, but that no one was willing to go. He continued to say that there was a ministry there called Latin America ChildCare (LACC). They put schools in impoverished communities, buy the kids a school uniform, feed them a hot lunch, bring in medical teams, give them the Gospel and do ministry outreaches to the families and community. But in Peru, they were without a director. They weren’t feeding anyone anymore, they were letting teachers go and turning students away. I remembered my prayer in Mexico and felt God’s hand on our lives. I went home and asked Lena if she’d ever heard of Latin America Childcare. She said, “Don’t you remember? I applied to work with them when I got out of college.” We held that LACC brochure in our hands and could feel the hands of God around our lives. He knew what would be needed back in 1988! He used my prayer and Lena’s vision to confirm our call to Peru, and not just to Peru, but also to LACC. So, one of the things we’ll be doing in Peru is directing Latin America ChildCare.
Posted by Bill and Lena Shrader at 3:30 PM 1 comment:

The child at right is Duber, a 6 year old attending an LACC school in Peru who needs a sponsor. Visit the web site at http://www.lacc4hope.org/. Click “sponsor a child,” the select "Peru" under the country tab.

There are 8 Latin America Childcare (LACC) schools in Peru.

2 in the North Coast region

2 in the Amazon Jungle near Iquitos:

1 in the South, in a mountain/desert region:

Posted by Bill and Lena Shrader at 3:48 PM No comments:

Praise for light at the end of the tunnel

Lena and I cried tears of joy a few days ago. We can see a light at the end of the support raising tunnel and it isn’t a train! As I write this, we have only $250 left to reach our budget goal. One month ago, we still had $1500 in monthly support left to raise. We consulted with World Missions and made the decision to extend our itineration until Jan 2 (the beginning of the winter term at language school). The decision was emotionally difficult, but seemed financially obvious. We put a lot of prayer into it—seeking earnestly to make the decision “in faith.” So, we set our sights on the months ahead and began scheduling new services. I checked three weeks ago and the $1500 was down to $1200. I checked a week ago and the $1200 was down to $679. I called the national office a few days ago, thinking we still had $500 to raise, and found out that we only have $250 left to complete our goal. (Praise the Lord!) As such, we probably could have gone on our initial target date of August 29. Nonetheless, I believe that the decision to delay was of the Spirit and that even the data we used to make the decision (e.g., still needing to raise $1500) was from the Lord.

Now, the question everyone asks is whether we will change our plans again and try to leave on August 29. After praying about it, we’ve decided to continue with the currently planned departure date of Jan 2. When we received the call to Peru, I knew that the final phase of the doctor of ministry degree would conflict with our departure date. I was hoping I wouldn’t have to make a decision between our mission call and completing the degree (which we feel is an important part of the mission to Peru). When our budget was still 10% away from completion, the decision was made for us. That meant that I’d have time to jump some big hurdles with regard to the degree’s completion. As such, it seems wisest to finish out the course we’re currently on. If I work hard, I can write the project (the D.Min. version of a dissertation) and finish a class I’ve already taken, but for which I still have assignments due. That leaves one class left to complete the degree. I plan to do that class while at language school.

I thank the Lord for calling us to Peru and helping us to raise the budget—including the final $250 that is yet to come. I also want to thank the churches and individuals who have joined our Peruvian mission team. May the Lord bless each of you to see His name glorified because of your faithful sacrifices.

Mucho Agape,
Bill
Posted by Bill and Lena Shrader at 11:23 AM 1 comment:

Email ThisBlogThis!Share to TwitterShare to FacebookShare to Pinterest
Labels: Support 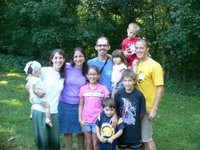 The whole family spent July 30 – Aug 5 at the Great Lakes SICM conference. SICM stands for Student Institute of Campus Ministry. It is a conference that I was a founding member of 5 years ago and one of the best ministry experiences I’ve ever had. Students’ lives are transformed before our very eyes as they are put through the riggers of witnessing, leading worship, leading Bible studies, etc.

We skipped SICM last year, having already made the transition to World Missions. We were there this year so I could teach on Emotional Intelligence in Collegiate Discipleship—the topic of my doctor of ministry project. Lena came as staff for the first year (SICM 1) students, while I worked with the returning (SICM 2) students. Overall, it was a great experience for all of us. Hannah stayed with the SICM 2 students for most of the conference, re-confirming her commitment to be a Chi Alpha pastor. I asked her if she learned anything from my teaching. She said no—that she’d heard it all from me before, while on long car trips. I had a lot of anxiety during the week—mostly regarding the desire to do a good job on the topic of my doctoral project. It was also an anxious time because I was aware that this was one of the big hurdles that I had to cross before we left for Peru. So, it was a significant (though threatening) milestone.

The picture at top is of us with Steve & Liz Brannan (and their kids: Cole & Lydia). They are XA pastors at Wright State. The picture at the bottom is of SICM 2 students witnessing and street preaching in Cincinnati. 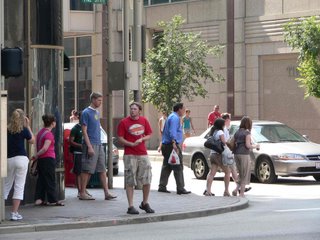 Posted by Bill and Lena Shrader at 11:43 PM No comments:

We praise the Lord for a miraculous increase in our monthly partnership base. We're currently at 91% of our budget, with only $500-$700 to raise in monthly pledges. (The $200 gap is the difference between the official tally and my unofficial count.) We were supposed to leave on August 29, but have been granted an extension until Jan 2. When we were granted the extension (two weeks ago), we still had $1500 to raise. The last $700 has come in unexpectedly (and gratefully) fast. We still need the extra time, though, to raise the rest and to complete some difficult assignments regarding my doctorate; i.e., the writing phase of the final project and two papers for a class I’ve already taken. Hopefully, when we depart, I'll only have one class left to complete while we're in language school in Costa Rica.
Posted by Bill and Lena Shrader at 11:40 PM 1 comment: