Thank you to all who have sent condolences. I'm grateful for the prayers and expressions of love.

My dad's funeral was Saturday. It really was beautiful. My sister wanted the song "Danny Boy," which isn't an approved Catholic mass song. It turned out that there is an approved song called something like "a Celtic farewell." It was to the tune of Danny Boy with awesome words. It was very lovely. At the grave side service, the air force funeral honor team folded the flag and presented it to my mother. Then one of them walked away and played taps on a bugle. Rather than the flag, they should have presented us all with Kleenex. It was very moving and beautiful. I recommend joining the service, just so they can play taps at your funeral.

Having said all that, the day of reckoning has come. The funeral activity is over. The crowds have gone home and we are left with the realization that life will never be the same again. After the funeral, I showed a slide show of pictures from my dad's life. My cousin asked what kind of golf cart my dad was driving and I said, "I don't know what kind it is, but dad will know." That was the first of many instances yet to come where I forget that dad isn't here to answer my questions. Now that the activity has died down, I'm feeling very sad and depressed. That's the nasty aftertaste. I know it won't last forever.

Here's what I wrote for the inside of my dad's funeral bulletin: 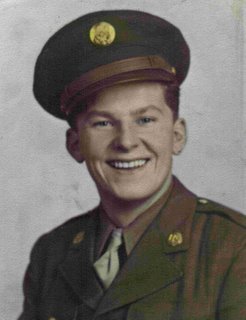 Morris J. (Curly) Shrader was a hero and an over-comer. He was born on April 19, 1924 in his grandmotherÂ’s house in Oak Grove, Missouri. During the winter, he attended school, but his summers were spent working on his Aunt PearlÂ’s farm. The depression and the farm produced in him an aptitude for solving problems and a strong work ethic.

In 1940, the family moved to Cincinnati, where Morris became an electrician and met June, his wife of 63 years. In 1942, he joined the Army Air CorpÂ—serving as a senior gunner on a B-29. On March 2, 1945 MorrisÂ’ plane was shot down over the Indian ocean. He was held in solitary confinement at a Japanese POW camp in Singapore. The determination it took to survive as a POW would mark the rest of his life. The physical trauma of that experience set the stage for a 30 year battle with heart disease. In 1973, Morris had the first of many heart attacks. After his first open heart surgery, the doctors gave him 10 years to live. They did not know what a fighter he was! 33 years later, he is finally taking his rest.
Posted by Bill and Lena Shrader at 5:22 PM 2 comments:

Email ThisBlogThis!Share to TwitterShare to FacebookShare to Pinterest
Labels: Grief

My Father died today, 6-21-06, around 6:00 AM. He was a truly great man. A hero beyond the kinds in movies. A WWII prisoner of war. He was captured by the Koreans and tortured by the Japanese and he never spoke poorly of either. He always supported me in my dreams, even when it was nutty. He was very loving. I will truly miss him. I thank the Lord that I had many chances to tell him how proud I was of him and what a great dad he was. May the Lord embrace him now. May the Lord take him into His loving arms and bring him peace.
Posted by Bill and Lena Shrader at 12:50 AM 2 comments:

Email ThisBlogThis!Share to TwitterShare to FacebookShare to Pinterest
Labels: Grief, Memories of my father

After hearing the story of our calling, our friend John Wootton wrote the following:

There's an amazing story how the calling of God 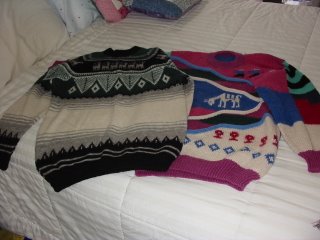 Yes, we might question if we've heard from the Lord
Sure, we might discard LACC* letters
But God has a way of preparing our hearts
So we're called by Peruvian sweaters


*LACC stands for Latin America Child Care--one of the ministries we'll be working with in Peru.
Posted by Bill and Lena Shrader at 12:21 AM No comments:

Posted by Bill and Lena Shrader at 2:33 PM 3 comments: 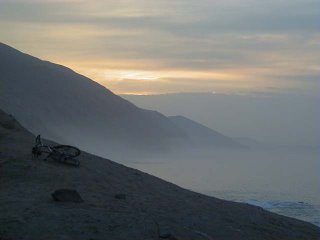 Many of the pictures on our web site come from one photographer: Erich Henry Kuball. He did a bike tour of the Americas back in 2001. (There are a lot of people who tour the world on bikes!) You can see a bike in his picture of the sunset over the Pacific coast. He has a great eye and has taken some of the best pictures I've seen of the Coastal Desert--the western border of Peru, between the Pacific Ocean and the Andes mountains.

The west coast of Peru is predominantly desert. The Andes mountains act like a wall for the weather, so that 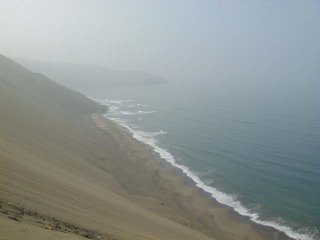 the western side is all desert and the eastern side gets all the rain. When I look at pictures of the western coast, I imagine that this is what it would look like if the ocean ran up against the shore of the moon. Ironically, this is the side of the mountains we will be living on. Lima, Peru is situated in this coastal desert region. The picture below is of one of the highways that runs through this desert to Lima.

All three of these photos have a foggy quality. That's what happens when 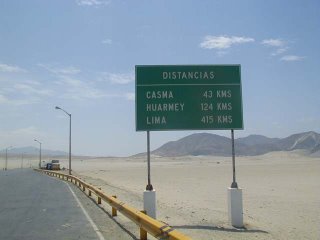 the cold waters of antarctica meet the hot sands of the desert. Fog is a big part of life on the coast, but there are a few clear days--as can be seen in the picture of the rocky coast of southern Peru, below. 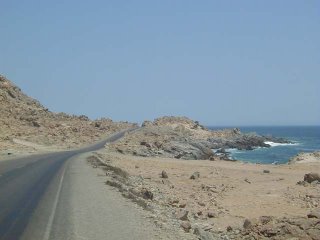 These pictures come from www.VirtualPeru.net.
Posted by Bill and Lena Shrader at 10:10 AM No comments:

Email ThisBlogThis!Share to TwitterShare to FacebookShare to Pinterest
Labels: Copyrights, Pictures of Peru 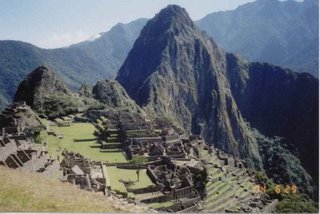 A pictorial directory of Peru always begins with Machu Pichu--the last holdout of the Inca empire. It's a large installation, high in the Andes Mountains. These pictures were taken by my friend, Amy Afshari.

When we were called to Peru, I started surfing the web to learn as much as I could. Eventually, I started saving pictures that I felt were meaningful. Later, I used these to put together our website (www.shraderministries.org). At the time, I didn't understand how individual copyrights applied to pictures on the web. For example, Google's image search function can find pictures of nearly anything. Some are free, but not all. It's up to

the surfer to make sure that usage is permissible. As such, I'm now at the place of trying to find if the pics I've used are protected. For some of the pictures, I don't even know where they came from. For those for whom I know the source, I've started collecting copyright information and asking the owners for permission. What follows in this blog entry (and others to come) is a pictorial directory of my favorite pictures of Peru and their copyright information. I'm indebted to the work of Monica Mennen-Vela and Govert-Jan Mennen (www.virtualperu.net) for their meticulous copyright references and permission to use their pictures. 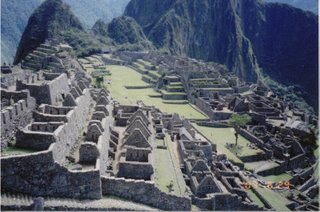 Posted by Bill and Lena Shrader at 10:34 AM No comments:

Email ThisBlogThis!Share to TwitterShare to FacebookShare to Pinterest
Labels: Copyrights, Pictures of Peru

I've learned a lot about Peru by surfing the web. The best website is www.virtualperu.net. It contains stunning photos and excellent explanations. The website was written by Monica Mennen-Vela (aPeruviann woman, born in Lima) and designed by her husband, Govert-Jan Mennen (from the Netherlands). I highly recommend it.

If you visit www.virtualperu.net, you may notice a strong resemblance to the slide show on our website, www.shraderministries.org (on the "About Peru" page). Many of the pictures came from the Mennen's web page (see the blog entry "Pictures and Copyrights").
Posted by Bill and Lena Shrader at 10:15 AM No comments: