This from Lena:
Back when getting lost in a novel for days at a time was a normal practice for me (I was an avid reader as a young girl), I had the feeling often. I would lose myself in the characters and their private struggles, and as I would near the ending, I dreaded it. Sometimes, I admit it, I peeked at the end. The better the book, the stronger the regret as I flipped the last few pages, dreading the moment when I had to leave the little space in my mind that I had created to hold my hero and all their defeats and joys.

What I am feeling now feels a lot like that, but the hero of the story is my oldest daughter, Hannah. For those of you who have already launched some babies, I guess I have to plead a little patience. It is just that I have been forced to realize recently---through the onslaught of college applications, talk of financial aid, and the rest---that I am in the last pages of this book of daily-present parenting.

I am among the most fortunate of parents. The hardest things ever got with my girl were just totally normal things—practically rites of passage. We did our best to train her. We held her in our laps, we worshiped with her, we brought her to so many ministry events that she started to believe (and act!) like she was already a minister of the gospel! I remember chuckling that it was probably a good thing we were taking Hannah to the mission field when she was 12, because she often had something to add to her dad's teachings to the college students, and I didn't relish having to ask her to hold back a bit.

So the thing that I am feeling right now doesn't have much to do with worrying about her being able to cope (although I have all the normal concerns). It is mostly that I will lose the dailiness of our relationship. I will lose the moments when she feels like talking and sidles up next to me on the couch, signaling me that it is time to chat. I won't know as often if she had a good or bad day, or know the personalities of her friends so that the stories of her day take on that novel-like space in my mind, so that I can delve into the story with her.

And very selfishly, I will lose all the pride that fills my heart when I feel the Holy Spirit rip through an auditorium or a little shack-of-a-church in the countryside when she opens her mouth to lead in worship. I will SO miss that. I vividly remember the first time I realized the gift that was on her. We were at our home church in Cincinnati, and she had a song to sing in Spanish---she was only 12, and she barely knew what she was singing at the time, but the gift was evident, and I was embarrassed by the flush of pleasure that raced through me. I had had my suspicions—but that day they were confirmed. What a gift. What a special gift!

A dear friend of ours had a dream about Hannah that she shared with us yesterday. In the dream, Bill had been training her to do a special dance for church that involved her dancing over a map. She was still learning the dance. At one point, Bill could no longer see her doing the dance, but she could, and Hannah was touching people and walls and prophesying to them, as she danced all over the map. She wanted to tell Bill that yes, she was doing the dance and it was beautiful, even though he couldn't see it. She learned the dance.

Tears streamed down my face as she finished telling me the dream. The part that hurts is the not seeing. We are so blessed that our pain is that of missing victories, of skipping chapters that we would have liked to savor. It could have been tears of disappointment or fear that her life would be fraught with consequences of poor decisions, but she is so grounded that I highly doubt it. No—much more likely that we will simply miss out seeing the dance.

I am slowing down a little in these last pages, taking it all in. I am being a little more selfish with my time with her, savoring the words as I deliberately turn the page instead of hurrying on to the finish. All too soon, she will be a continent away. We bought the expensive leatherette coat for her birthday-- I didn't even care that it wasn't on sale. We look for holes in the schedule where we can separate family time. We are thinking about what we will regret not having done in two years that we can do something about now. Family vacation? How many more opportunities will there be for the six of us to be all together? Pages are turning, and I can feel the weight of the spine shifting to the front with each turn.

The sequel is going to be good, I can tell. I probably am going to have to content myself with reading the reviews, but that doesn't make the book any less a good read—it just means I won't know first-hand. Regardless, I will always be thankful for this one that I have enjoyed thoroughly, drinking in the characters and crying and laughing out loud through it all. 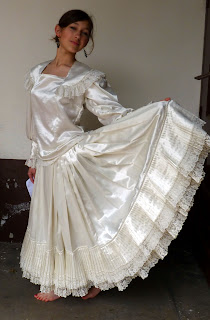 Pictured above:  Hannah (15)preparing to dance the Marinera (a traditional Peruvian or Chilean dance, depending on which you happen to be) for a school event.
Posted by Lena Shrader at 10:28 AM 1 comment: