Please pray for the 33 miners who are trapped underground in Chile. As I read the news about them, my heart is sad and fearful. The experts say that if they are successfully rescued, it is not humanly possible to do so for 3 months. They're telling the guys that they will hopefully be out by Christmas. It may not be humanly possible, but God is greater than a drill. Let's pray that God sends wise, gifted engineers to figure this out in a matter of days, rather than months.

From my perspective, this is looking like the gulf oil spill, where greedy corporations (the men are trapped in a gold mine) have created a mess that can't be fixed in a minute--and average working people are suffering. Unlike the oil spill, we have videos of these guys trapped underground, while their families hold a vigil 1/2 mile above them. 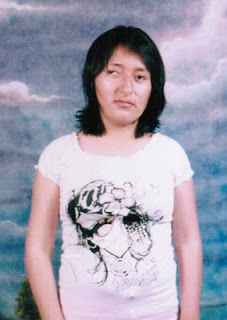 I believe in and have seen the gift of healing in operation. I also believe that God has given us doctors as a gift and that sometimes, God chooses to heal through his faithful servants who work in the medical profession. Therefore, we've had the incredible joy of praying for individuals and seeing them miraculously healed at the church altar. We've also had the joy of taking someone to the doctor who couldn't have otherwise gone. Cindy* is an example of both. She attends one of our schools in the Andes mountains. The pastor who oversees the school called and and told me that she was going blind, but that her conditon was treatable. The only problem, her family lives in extreme poverty and going to Lima for an operation would be impossible for them. The pastor asked if Latin America ChildCare could help. I said yes! With help from the Extreme Poverty Fund, LACC paid for Cindy to come to Lima for surgery and glasses. I saw Cindy after the surgery and she was incredibly happy. The picture above is her "before" shot. The one below is after the surgery, wearing her new glasses. She's not smiling in the picture below, because she's incredibly shy! But, when the camera wasn't on her, she was all smiles and was grateful for the gift of sight. 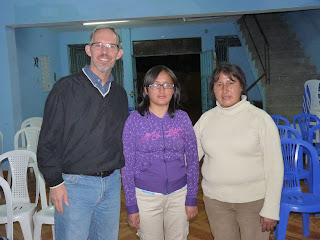 Thanks to all our LACC sponsors for your faithful giving. You've brough the gospel, hope and a better future to Cindy and her family.
Posted by Bill and Lena Shrader at 8:19 PM 1 comment: 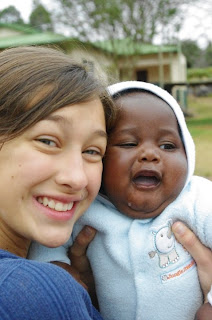 "Mom, I really want to go to South Africa."

I had noticed that most of Hannah's old friends from church were going on the trip, and I realized that she would feel lonely and a bit left out of things while they were gone, but I hadn't once considered her going. One of the moms, an old friend from church had broached the topic with me (of Hannah maybe going), and I brushed if off quickly and easily. After all, Hannah was only just coming from the mission field, we were exhausted from having only recently arrived in the States, and were struggling to make our old house living-ready, watching the earnings from having rented it disappear. So I went with my first instinct, and said a resounding "No!" Bill, always the less impulsive parent of the two of us, gave a more reason-centered answer. He said that she could go if she could raise the money. Almost as good as a no.

I softened (like I usually do) and told Hannah that she at least had to write to pastor Dele and find out what we would have to do to get her on that trip. She was scared, but I told her that this was good practice--that anything worth having in life requires a little fight from us. Little did I know that her letter would move the hearts of our pastoral staff and others to get behind her and put her on that flight with her friends. All of this happened in the space of a week and a half, from start to finish. At one point, we were even grappling with the possibility of putting her on a flight by herself, to catch up with the rest of the team in Johannesburg. Oh my.

My point? At some point in all of this process, I felt the control of it completely leave my hands. Hannah was praying, seeking God's will, fasting. And as I continued to "raise issues" with the process, explaining why it couldn't happen, or wouldn't be prudent, the Lord seemed to be turning to me and saying, "Thank you for your services. I greatly appreciate your input. Hannah's roots have now matured to the point that she and I can have private conversations that don't involve you. So, I'll take it from here."

We know that when a child turns 7, they start losing teeth. When they turn 16, they get a driver's license. But when does a child reach their full spiritual gestation period? When they start going to the Lord on their own, hearing His voice for themselves. At that point, even though I may be kept on as a "consultant," my full-time job as interpreter of God's will for their lives is over. And they might be 15 or 20, but when that happens, it is over. I was shocked, and yet I knew it was true. My baby girl was working out her own salvation.

So, here is my celebration of Hannah's spiritual independence. Like all those other benchmarks of growth, I will adjust to the changes it brings, but I know that this one is supremely important, and will guide all the rest of the decisions of her life far better than if I stayed that "contact person" for God. She went to South Africa, blessed a lot of orphans, and even received some words from the Lord for her life. It will be a pleasure to watch it unfold.