Calling Sponsors into Being That Are Not as Though They Were 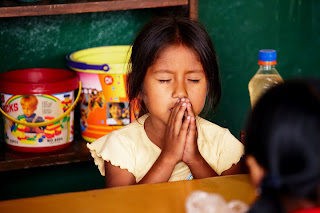 There is a dynamic in the Christian life that doesn't make any sense, but is very real. When we pray, we are instructed to pray believing that we will receive what we are asking for--as though it was already ours. When we do this, we become a bit like our Father in heaven, “who calls things that are not as though they were.” Nothing plus faith equals something. We become participants in God's response to our own prayers by demonstrating faith that He hears and wants to respond to our faith-filled prayers.

Twice a year, LACC does a special project in which the children write a paragraph about a given theme. This gives them a chance to connect with their sponsor and give the sponsors a window into their lives. The first project this year was “My prayer for you...” The children were to write a little prayer that expressed their heart desires for their sponsors. Now, it is our office's policy to have all the children—those with sponsors and those awaiting a sponsor—to do a project, just in case one of the children is assigned a sponsor while a project is active. My heart fell as I began to read the prayers the children wrote to sponsors who did not yet exist. I felt the irony, but I know that something powerful happens when we do something in faith---like write a letter to someone who doesn't exist yet, but is an answer to our prayers.

Some of the kids were quite specific:

“...and please send me a sponsor who is good and handsome!”

Some appealed to their imagined sponsor's sense of justice:

“I would like God to move on your heart and that you would be my sponsor, and that you would help me in my studies, so that I can be a professional one day and escape the poverty we live in. To the person who reads this—thank you very much and may God bless you richly. Thank you. Good-bye.

Some shook the heavens:

“Help me to have a person from You who is kind and good who can help me to be like you with the very poor people who live around here. Help me to study hard to be able to keep going. Thank you, Sponsor. I am going to have a sponsor. Thank you, Lord, for blessing my sponsor for choosing me. Thank you. I am sending you a hug and a kiss.

I want you to know that for some reason, we had probably the biggest jump in sponsorship since that project was written that we have ever seen.  In fact, I KNOW that it is the biggest, from all of the first letters I have been translating!  There are circumstances that we can explain that with (we have a staff member on itineration currently, which really helps!!), but why now? There have been months in our own itineration when very few children have been sponsored. Maybe it was because some kids took a step of faith and called a sponsor into being who wasn't as though they were.  And just so you know---all three of these got sponsors!
Posted by Lena Shrader at 11:54 PM No comments: