Make Every Day a Norma-l Day 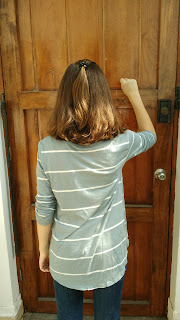 I am NOT super kind.


But I AM afraid of being the rich man in the story of Lazarus the beggar, who died and suffered eternally for being a selfish man.


That is why I didn’t send Norma away on her first visit to my house. Not long into our conversation, I realized that Norma probably had some learning issues. She was about my age, stocky, and badly in need of some dental work, which I later related to her great love of sweets.


It was a sunny, hot afternoon about two months ago when Norma first came to my door. Our conversation went like this:


“Hi. There was an older lady who lives here who told me that I could come and get a piece of cake this afternoon. Can I talk to her?”


Norma: “Well, she told me I could have a piece of cake.”


Norma: “Do you have something to eat?”


The conversation (or better said, barrage of requests) continued on…..Norma wanted to be certain that she asked for all her favorite things. She asked me for something sweet to drink, for jewelry, for purses (she LOVES purses), desserts, jello, cookies for her son. She has also had two birthdays in the short time I have known her. 😊 Norma began to visit me regularly…every other day, sometimes every afternoon. I put a stop to the daily visits, as I realized that soon I would have to budget Norma into my grocery trips if I didn’t. I told her she could come once a week, which she MOSTLY abides by.


Norma has impacted my life in the strongest of ways, and probably not in the way you might think. All of you mercy people out there are thinking about all the nice things you might do for Norma, and assume that it is kindness that motivates me. Don’t be deceived. I usually know from her persistent ring that she is at my door, and it is not mercy that makes me answer. I just give her what she wants because I am obliged to care for the poor and because if I don’t, she will continue to pester me anyway. The real thing about Norma that speaks to me is that she NEVER STOPS ASKING FOR STUFF!  She is one of the most persistent people I have ever met. If an entrepreneur went after business opportunities the way Norma does with jello, they would be a millionaire.  I HATE asking for things, and Norma reminds me every week that he who does not ask does not get.


I am in a season where I am forging new territory with ministry to university students. I have to ASK---pastors, university officials, prospective student leaders. Over and over again. After the third try, I want to give up. But then there is Norma in my mind, asking for gelatin. And I knock again. Norma is God’s way of telling me that if I would just keep pushing, I would get more of what I want! The woman with the unjust judge cries out until he gives her what she wants, not because he likes her or even cares for her needs, or about justice. He does it because she is driving him nuts. I relate.


One day, I didn’t have any food for her. She was sorely disappointed. She kept running through her list. Nothing. I was ready to send her on her way with a pack of cookies and a drink of water (sometimes I get stubborn about the sweet drinks issue, thinking it is better to give her water). Then like a light going off, she asked for flan. I realized I had the remains of a HUGE flan in the fridge that my flan-loving husband wouldn’t finish because of his travels. I told her that, yes, I actually DID have flan! She literally jumped up and down with excitement. She had hit the jackpot! I was flabbergasted that she had just happened to ask for something that was in my house, that usually wasn’t. It was almost like an angel playing a joke on me had dropped it into her mind.


One day, it’s going to be my flan day. A door will open on a campus that looked impenetrable a day before, or someone will decide to become a disciple of Jesus because I listened to the Holy Spirit. I'll risk crossing the line of making a bother of myself.  I will put on a little bit of Norma-tude, and a huge portion of Holy Spirit-gifted flan will fall in my lap. I may even do a Norma dance. And then I'll do it again!

Posted by Unknown at 3:26 PM No comments: