Lessons from the tooth and toe!

Our first term as foreign missionaries had been successful, but was not without challenges. Some of the challenges tested our faith and nerves. They left us weary and ready to return to the states for support raising and recuperation.  Others challenges did not look significant on the outside, but I somehow felt like they were. When our term was up and it was time to move back to the states, I suffered three minor wounds that made me feel like the devil was trying to chase me away. They were a broken tooth, a bruised toe and a torn rotator cuff.

The tooth was a molar, held together by a combination of Elmer's glue and duct tape. (Actually, it was ceramic polymer, but it LOOKED like Elmer’s glue and duct tape.)  In the midst of the move, the tooth exploded like Mount St. Helens. (I shared about this on a previous entry.) The dentist did not give me enough Novocain! I could feel everything he was doing. I was totally tense, awaiting the moment when the drill would hit the nerve. The smell of the tooth/ceramic being drilled away was sickening. (Please see the attached photo, which is a 100% real recreation.) 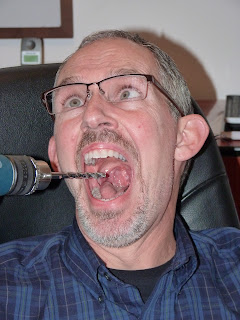 Basking in the power of complete self-pity, I lay in the chair thinking, "Why do I have to go through this pain in the last few days of our first term. Can't I get out of here without having to endure another stressful experience?"

The answer was no. The dentist put in new glue and fried it with a type of laser beam that is the dentist's version of an Easy Bake Oven. I left the office with a certified case of PTSD (Post Traumatic Stress Disorder), aggravated by PTDV (Peruvian Traumatic Dental Visit).

I decided to recover by going back to our apartment and moving to the United States. Back at the apartment, two things happened. The first is that our cleaning woman washed my running shoes. Our cleaning woman worked for us twice a week and was obsessed with our shoes. Since Lima is a desert, shoes get dirty fast—but they were no match for our cleaning lady. She had them looking like new in a jiffy. Unfortunately for our kids, they often discovered that their shoes were soaking wet just as they needed to put them on to go to school. The routine usually went like this:

Bill: Put your shoes on, we're going to be late!

Bill: They're in the laundry room. Quick, put them on!

Shrader child: Yuck! They're all wet!

Eventually we had to forbid the cleaning woman from cleaning the shoes, but not before she got to mine. I thought, “Wow, these look like new.” But they didn’t feel right. After 20 trips up and down four flights of stairs, I realized what it was—they had shrunk. My big toe (on the right foot) began to ache as the shoe pushed the nail into the toe.

It takes more than a bruised toe to keep this missionary from moving overseas, so I ignored the pain and bent over to pick up a mattress. That’s when the second unfortunate event occurred. The mattress was not a California King or even a stately queen. It was a humble twin. I picked it up a little off center, so I tossed it in the air, just a little, to get it better situated. As I did so, something in my left shoulder made a sound like a rubber-band snapping.

A friend saw me wince and said, “Let me help you with that.”

I said, “Thanks, because I don’t think my arm is connected to my body anymore.”

Technically, it was still connected, but not of much use. It was a torn rotator cuff and the mattress was, literally, the last straw. For months after that, I could only use my left arm if I didn’t have to actually lift it. So, I returned to the states on June 28, 2010, with a gimpy toe, a useless arm and a fear of hot beverages. Thankfully, in a short amount of time, God began a restorative work in us that included healing my arm and my toe.

The initial physical evidence of God’s restoration was the bruise under my toe nail. It began to grow out. In October of 2010, Lena and I traveled to Yulee, Florida and had a great time ministering at Celebration Assembly. While walking along the beach, we talked about the bruise and joked that it was a sign from God; i.e., that when the bruise grew out, it would be time to return to Peru. Truthfully, I was only half joking. For me, the bruise had taken on the identity of the difficulties we endured during our first term and of the restoration we were receiving from the Lord during our time in the states. My shoulder was another sign. Even though it was less visible than the bruise on my toe, I was aware that it hurt less each day. God was at work.

The next toe picture was on March 22nd – nine months after the move. As you can see, most of the bruise is gone. The nail, where the bruise had been, was no longer connected to the toe. A few weeks later, it was time to clip it off. The date was April 15th. We had received the word from the Lord that we would return to Peru “on time and by a miracle,” a month or so before. The toe nail was a ridiculous, but real, confirmation. It was time to return.


But one thing was necessary to do before leaving Cincinnati—visit the dentist. So, the day before we moved out of our house, we all went to the dentist’s office. The first thing he noted was that the duct tape and Elmer’s glue were not holding up very well. (This was not the fault of the Peruvian dentist. Rather, it was a sad fact of the state of the tooth.) He begged me to come back later, to try to repair the tooth. But I could not. We had people waiting at the house to begin the move.


Ironically, as my toe and shoulder pain got better, Lena got worse. She had experienced debilitating pain in her jaw. For months she had been on a powerful pain medication to relieve what was thought to be trigeminal neuralgia -- a debilitating nerve disorder. On July 20, the day before our move, Lena went to the dentist. He discovered a cyst in Lena’s gum, just below her bottom teeth. It needed immediate treatment. Therefore, on the day of our move, Lena got an emergency root canal to flush out the infection. Though it added stress to our move, it was an answer to prayer. The pain from the cyst had plagued Lena for months. We prayed for revelation and God revealed the cause. He also provided an excellent oral surgeon who was able to take Lena in the very next morning.

The move out of our house and the return to Lima went very smoothly. (Thanks to all our friends who helped!) But, a few days after arriving in Lima, two things happened: First, Lena smashed her thumb in the car door. It was extremely painful and all of the observers said, in unison, “She’s going to lose that nail!” (I would show you pictures of her nail, but it would require a warning label.)

At nearly the same time as Lena’s semi-thumbectomy, Mt. Saint Helens erupted once again--my tooth exploded. Thankfully, I was able to get to the dentist the next day—though not without immense fear on my part. (I could feel the nerve with my tongue!) The dentist bulldozed the remaining shards of the tooth and rebuilt it with a gold crown. (Please note in the photo that A) they were having a two for one sale, and B) the street credibility that gold teeth gives a man. Since the teeth are molars, one can’t really see the gold in normal social settings; but, just knowing they’re there gives me a sense of confidence among those for whom gold teeth is a powerful fashion statement.)

This is where I reveal, with some apprehension, the part of me that feels like something spiritual is going on. I realize that my tooth, toe and tendon could have all been coincidences or the result of a lack of wisdom on my part. I realize that I’m at fault for not getting the tooth checked out sooner or for lifting the mattress in the wrong way. But I feel like there is more to it. Just before leaving Peru, I had to have emergency dental work.  Just before leaving the states, Lena had to have emergency dental work. Then, just after arriving back in Peru, I had to have emergency dental work again. Just before leaving Peru, I had a damaged toe nail. Just after returning, Lena had a damaged thumb nail. Is it just coincidence or is God or the enemy trying to write a story with too much poetic parallelism? My suspicion is simply that the enemy has been trying to attack us and wear us down. That is, we've been fighting a spiritual battle tooth and nail!


A few things are apparent from these experiences:


1) Lena and I put off visiting the dentist until the last possible minute.


2) One should never wear shoes that are too small or close a car door when you’re exhausted and in a hurry.


3) The enemy will try to attack and wear you down by all sorts of tactics, but he will not win. God is there, providing miracles along the way. The cyst in Lena’s mouth was so painful, it caused literal despair--but God revealed the cause. That’s the part we need to keep reminding ourselves. We tend to get caught up in our pains. When it happens, it is helpful to remember the times when God got us through. When I was in the dentist’s chair or was experiencing pain from my toe and shoulder, I was tempted to feel that the enemy was going to keep poking us until we gave up. But that was not the case. God did not let that happen. There are a lot of things to be afraid of in life (especially for missionaries). It is easy to walk in fear. But, that’s no way to live! It’ll suck you dry. So, let me state the obvious for my own encouragement (and for those for whom this story resonates in some way): Though we may experience pain and frustration, God answers our prayers and brings about restoration.
Posted by Bill and Lena Shrader at 11:43 PM 1 comment: