Wounds that Fester and Giving up the Right to Remember


A few years back, I had developed some emotional wounds from the bumps and bruises that happen in church life (if you don't have any, you haven't delved very far into community!). In fact, I had a list of them. I was able to recite them. And as a fairly dramatic Italian, I could even get you to cry along with me.


It isn't that those injuries were not real. But there comes a time when the wounds begin to emit a certain smell. They get beyond their expiration date, and the telling doesn't bring the same catharsis. In the place of the sense that you have lightened your load a bit, you begin to sense that some unpleasant things are happening in your spirit. The end of your emotionally-spoken sentence finishes with a bitter note, and in your spirit you can sense that your time at the sidelines is over, and that you need to suit up and get back into the game.


Back then, I developed a sort of test to determine how "loosed" my past actually was. I had to give up the right to tell the story. I had to let myself even forget the details that I had rehearsed so many times in my head. I had to cut off the influence of those painful events on my now, and in their place, I had to create--with my hand in the hand of the Lord's--a new interpretation of my past.


Looking back now, I can see how those old wounds led me to a place where I could let go of old roles that the Lord had given me, but was now exchanging for other tasks. I couldn't have released them, and I had no idea how important for my future it was that I was able to love the Master more than the Post. In my mind, they were almost one in the same, but as any mature believer learns, they are NOT. The Lord gives, and He takes away; BLESSED BE THE NAME OF THE LORD!


Honestly, I find myself in that place again. Once again, I am challenging myself to let go of the difficulties we faced in our first term in Latin America. The wounds were even scarier than the last time, but the Lord has spoken. Time to lighten the load. This past Sunday during a marvelous worship service (how I thank God for times like these--I pray you attend a church where those happen!!), the Lord showed me a picture of myself at the edge of a high cliff, where these burdens were tied to me. I took a sharp knife and cut them off, watching them careen crazily into a canyon below, then crash to a million pieces, never to be recovered. I even pictured myself returning to the bottom, starting to try to gather them together again (old habits are hard to break), but finding it impossible, and being relieved. Never again was I going to carry that load. It won't be the last time that I am tempted to meditate on these things; but I will remind myself that they are smashed into a million pieces, and there is no sense gathering them up again. As far as I am concerned, they can join all my sins in the bottom of the sea of forgetfulness!


My prayer is that today, if you find yourself in the same place; if your wounds have begun to have a certain sour note to them; that you would cut them off and let them smash into a million pieces. God has wonderful tasks for you to do that you cannot manage while your hands and your mind are full of what was done to you. Let them smash on the floor of the canyon into a million pieces, let the Lord reinterpret for you the events that caused you so much suffering, and then let Him give you new songs and dreams that are so much easier and pleasant to carry than putrified pain.
Posted by Lena Shrader at 10:20 AM 2 comments:

Groundhog Bill peeks out of his cave This from Bill:
I’ve been gone from the blog-sphere for a long time. Apart from our Christmas greetings, I haven’t blogged since August. For those who check here to see how we’re doing--sorry for making you wait and we are doing well, thank you.
The reason I’ve been away is the doctor of ministry degree. I started it 7 years ago and made great progress the first three years. I even completed work during our last itineration. Then we left for language school. My experience is language school was truly formative. The language school’s name is Cincel, which roughly translates to “chisel.” And that is exactly what it felt like. I learned to speak Spanish the way one learns to be an Olympic runner—by being dragged behind a horse. When we got to Peru there was a lot of work to do. I found that being a missionary was a full time job.
After being in Peru for one year, I finally completed a class that had been on hold since I left the states. Then I finished chapter one of the doctoral project (the doctor of ministry version of a dissertation). A few months passed by and I turned in chapter two. I still had one class left to take and, by grace, I finished that in May. (It was on Biblical Theology and I loved it!) Then, we moved back to the states. Our first term in Peru was excellent, but not without significant challenges. Both Lena and I needed to thaw-out from the stress of it all. Our house in Cincinnati needed work, which is a great way to thaw out. It was also time to start re-raising our budget. So, the doctoral progress slowed down—but it didn’t stop. We rearranged the bedrooms in the house, which gave me an office upstairs. It became my sanctuary—otherwise known as “the cave.” One evening, last summer, I took a couple hours off and went to the pool with the kids. Willy asked me, “Are you done writing your book, Dad? … Cuz you don’t go to the pool with us.” Ouch! I told him I wasn’t done yet, but the end was in sight.
Time went by and chapter three was finished. I believe that chapter three is the nail that sealed the door of blogging creativity. I was not able to think about the doctoral work and also write something creative here. My devotional journal also took a vacation during those months. I was still doing my devotions, but there wasn’t a lot of creative reflection going on. It was a worthy trade off. Getting a degree is not easy, but it is worth it. Real learning challenges one to go way outside of one’s comfort zone in the uncomfortable growth zone. That’s where I’ve been.
Over the Christmas holidays, I was able to turn in Chapters four and five—the final chapters. I’ve also compiled most of the appendices. I’m not completely done, yet. There are more edits to do, to get it right. I also have to present the project in Springfield, Missouri, at the end of April. Then I walk the line and officially become Doctor Bill. Working on this degree has been an incredible journey. The classes have transformed my thinking and the friendships I’ve made have been wonderful.
Now, I’m like a groundhog, peeking out of my cave. I’m writing today to say to my family and all my friends, “Thanks for your support.” Thanks for not feeling dissed when I didn’t call or come to some gathering. Thanks for understanding. Thanks for letting me press through and grow.
Posted by Bill and Lena Shrader at 12:45 PM 1 comment:

Ya mean they ain't got no bed?! 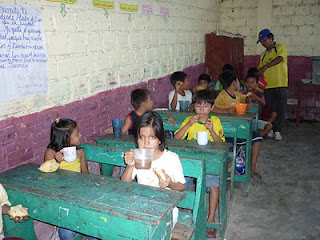 This from Lena:
There are moments for me when the day to day realities of the children we work to help become much more real. I will never forget the time I was distributing Christmas presents at a school, and none of the children would open their gifts. I couldn't make it out until I asked a teacher who gently explained to me that this was probably all many of them would receive, and that they didn't want to ruin the paper or open it yet. The girls all watched as the teacher carefully opened one, and slid it out to show the rest, then put it back together again. 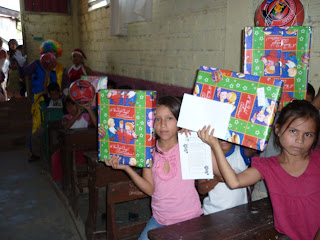 Recently, I spoke to a class of four year olds at our church, and I very much wanted to communicate to them how different these children lived from even the humblest who attend our church. I was telling them that in Iquitos, the houses are up on stilts, and many times, if you look into the house as you walk by, you see that there is nothing at all in them--maybe a hammock or something like that. I explained that the children don't sleep on mattresses like we do (most sleep on a pallet of some sort, with a sheet). The children sombered up considerably, and one sweet little one, eyes wide opened, said, "Ya mean they ain't got no BED?!!!"
It was amazing how they suddenly understood how poor these children must be. They got it. 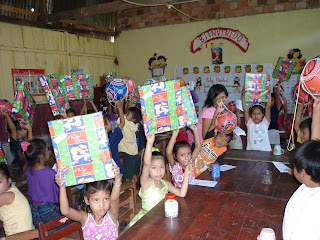 I must admit that I tend to bristle when well-meaning folks say something like, "We got poor people here, you know! You don't need to go so far away to find poverty!" Of course, that is true. But there is the kind of poverty that makes you be careful at the checkout, put back things you are going to need later, and worry about making your mortgage payment. Even then, many of us still have our education, our way of seeing ourselves, which elevates us and makes us eligible for moving on and achieving a brighter future. We usually have some resource, even if that is moving in with our parents until we find our footing again.
There is a kind of poverty that crushes. It keeps kids from getting a decent education because their lives are chaotic. It keeps their brains and bodies from developing as they should because they are malnourished. It isn't fair. Sometimes I just can't get my mind around how many of our students are forced to live. I see something that sets off that "Ya mean they ain't got no bed?!!" sort of reaction. I don't have anywhere in my mind to put a child who doesn't have a bed, or who doesn't have any love or affection in their lives, or gets nothing for Christmas. I hope that I never get used to it!
Posted by Bill and Lena Shrader at 11:40 AM 1 comment: