I was recently asked about our first eating experinece in Peru and thought I'd share the story here. Our first eating experience was very positive. It was at McDonalds. We're blessed to live in Lima, which has a population of over 9 million people and has a lot of "first world" products (like McDonalds, Pizza Hut and Starbucks). We do not have Walmart--so it's still a mission field! Outside of Lima, Peru is poor and undeveloped.

Even though our first meal was at McDonalds, that doesn't mean we haven't had some great food experiences. Peru has some of the best food in the world. On the Pacific coast, Peruvians eat a lot of seafood. The most famous dish is called Ceviche and is raw fish "cooked" in lemon juice and onions. That was our first real experience with Peruvian food. We tried it after we had been in the country for a couple of days. I was shocked at how strong the flavor was. My first reaction was that it was "OK," but that I didn't want to make a habit of it. Now, I'm ready any time! I usually order it with "Arroz con Mariscos," which is seafood mixed with stir-fried rice. I like that dish with a side order of fried squid. YUM! 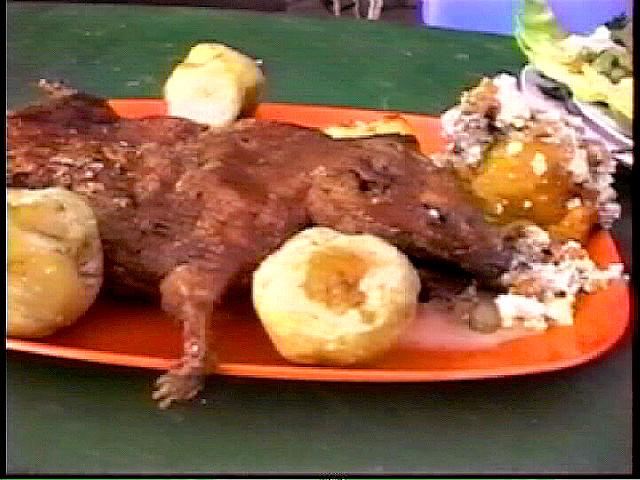 The second famous food of Peru is Cuy (otherwise known as guinea pig). You can eat it baked or fried. It tastes like the dark meat of chicken. It's not bad at all. It just takes too much effort (in my opinion), because the pieces are too small. It is also gross when they serve it with the head still on! Here, I've posted a picture of a Guinea Pig claw held by my son and a picture of my friend Ken Lydy (who does Chi Alpha at Wilmington College) with the claws in his mouth (that's me in the background). 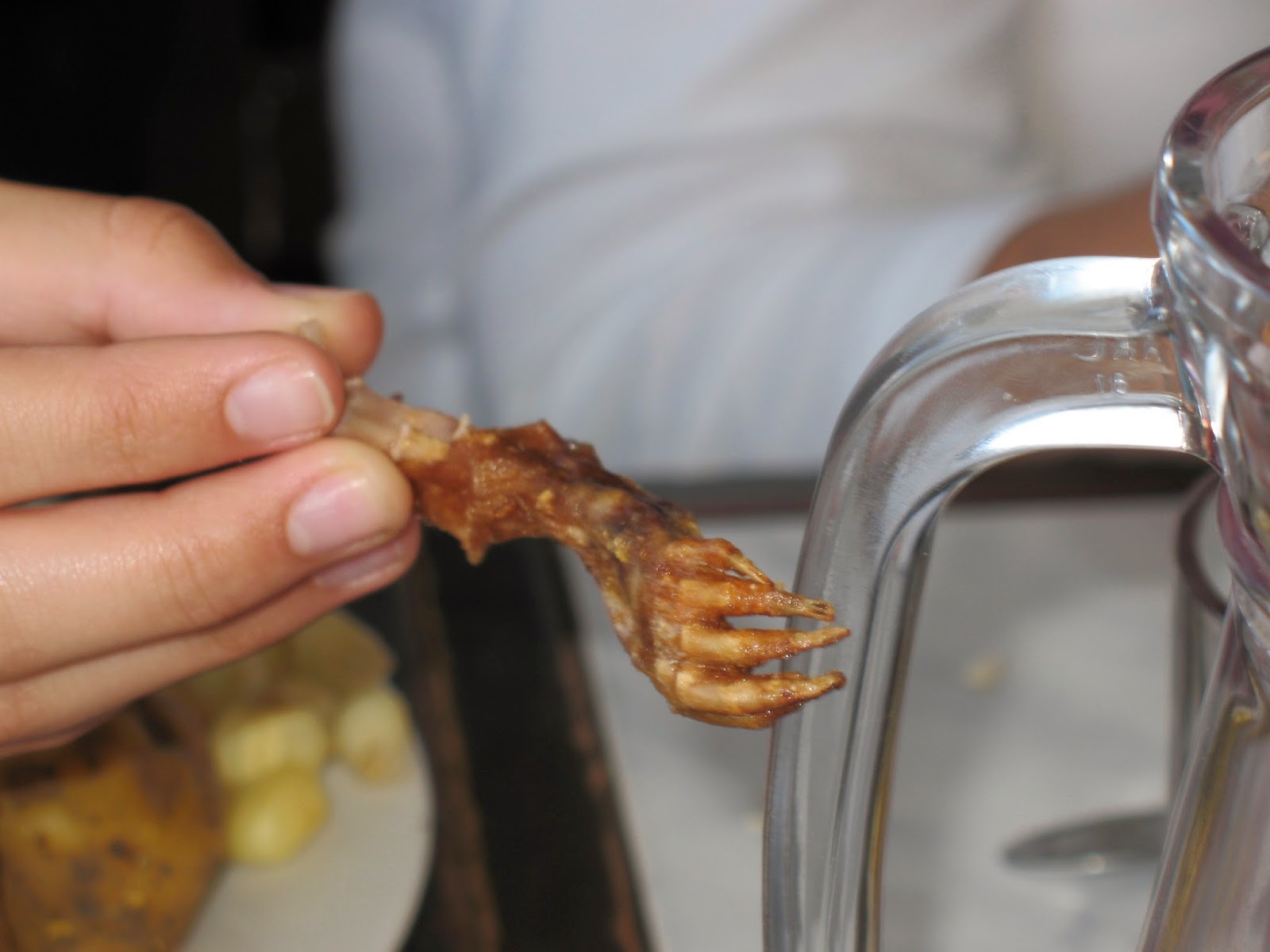 When I'm in the Amazon jungle town of Iquitos, I often eat Sabalo. It's a meat eating fish (like a piraanha) from the Amazon river and it tastes very good when cooked over a wood fire. I also like the deep fried caimon (alligator).

In the mountains, I eat cuy, trout, goat or llama. My favorite of those is goat. I love it.

On a daily basis, the peruvian people eat rice with rice. Then they have some more rice. They also eat chicken. Rotisserie chicken with french fries is very popular and VERY delicious. Missions teams that visit eat that three or four times in one week. We eat so much of it, we almost get sick of it--but not quite. The problem is that no matter how many times you've had rotisserie chicken and fries, it still smells good!

Posted by Bill and Lena Shrader at 5:32 PM No comments:

Thanks to everyone who has helped us proclaim the Gospel in Peru and the Andean region. Thank you! Please find, below, our latest newsletter. You can read it here -- or click on the caption to open it as a printable PDF. In this newsletter, Bill writes about ministry in the Amazon and about our upcoming return to the sttaes to connect with our friends and support team. There's also a few prayer requests. Enjoy!


We'll be returning to the U.S. at the end of June to let those on our support team know what they've been supporting! We're looking forward to it but moving back to the states for a year involves a lot of logistics and questions. For example, where are we going to live and what will we drive? How will the kids handle the transition? For all of this, we ask for your prayers. When we get back, we'll need to share the story of what God is doing here. As such, we'd love an invitation to share in your church or home fellowship group!
Posted by Bill and Lena Shrader at 3:59 PM No comments:

Working with college students and teaching in the Seminary, I am frequently confronted with the idea that the Bible is just the invention of men. This morning, in my quiet time, I was reading Galatians and noted that Paul confronted the same issue! That lead me to the following thoughts:

Gal 1:11 “I want you to know, brothers, that the gospel I preached is not something that man made up.” – People often say that they don’t trust the Bible because it is just teachings of men. Paul addresses this directly, continuing to say, Gal 1:12 “I did not receive it from any man, nor was I taught it; rather, I received it by revelation from Jesus Christ.” Paul is saying that he is a prophet like Moses; that is, just as God and Moses met on the mountaintop, where God revealed the Law to Moses, Jesus did the same with Paul, explaining the Gospel of salvation by grace through faith. Paul didn’t just think of it. He didn’t make it up. Jesus revealed it. Some people, even some Christians, are not comfortable with that. They like to think that the Gospel evolved, naturally. It did not. It was a supernatural, burning bush, shining light, knock-you-off-of-your-horse-on-the-road-to-Damascus epiphany (God appearance).

The question is, does God really speak? Does God really appear on the scene? The notion of the Gospel being invented by men or just a collection of human teachings presupposes that God does not appear on the scene, or that God does not talk or reveal things miraculously. In Paul’s context with the Galatians, some humans have added to the Gospel, to make salvation a thing of grace plus works. Their fallacy was thinking that they could add to what Jesus had miraculously revealed (like they could improve on His revelation). The modern day fallacy is that God doesn’t reveal anything; i.e., that Moses never saw a real burning bush and that Paul never actually met the resurrected Christ. Paul’s first-hand testimony to the Galatians doesn’t allow for either.
Posted by Bill and Lena Shrader at 12:30 PM No comments: