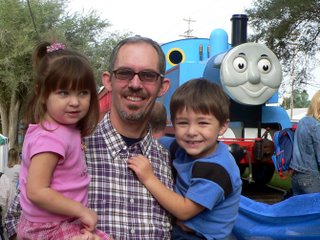 It’s not every day that you get to meet an icon—much less, ride in it/him. We got to do just that. Thomas Tank Engine (a really useful train) came into town for a publicity shoot and to connect with some of his fans. Willy is a big Thomas fan, though he feels a closer bond with Percy. I think it’s because Percy never let the fame thing go to his engine. Thomas, on the other hand, has spent his adult life marketing himself. I don’t think he’s left himself the time it takes to really develop your inner train. Don’t get me wrong, it’s not like he was 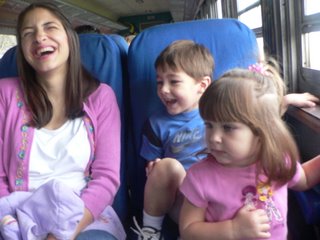 rude…just aloof. He had this plastic sort of smile that seemed prefabricated. He didn’t really talk to anyone and refused to sign any autographs. He just sat there smiling, while people took their picture with him. I was shocked at how good he looked for his age. You can see from the pictures that he doesn’t have any wrinkles. That’s quite a fete for a guy who’s 60. I heard the word “botox” being whispered more than a few times in the crowd. We got to ride in him, which reminded me of riding the train into London with my dad. I was the same age then that Willy is now. Willy and Abi loved it. I think they were more forgiving of Thomas’ 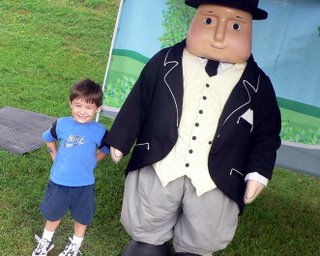 personality flaws. I should be, too. It’s not like I’ve ever been the star of a big TV show with global merchandizing. That’s a lot of pressure on a little train. Of course, Thomas’ manager (Sir Topem Hat) was nearby. Willy and he struck up a friendship. Abi was less trusting. Overall, it was a very pleasant way to spend an autumn afternoon. 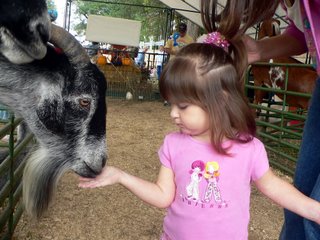 Posted by Bill and Lena Shrader at 2:05 PM

I pray often for your family.I have great confidence in you and your mission.
Also, just know that "Thomas Tank Engine" has vented a lot steam on his journey and that could be the factor with not showing any wrinkles.We all know it's not healthy being all bottled up!

My daughter loves Thomas too and missed seeing him this summer by just one week. It would have been a real let down if I hadn't kept the information from her.