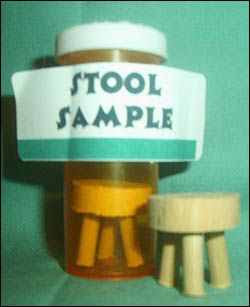 This is a follow up to the "Secretions" post. I took the medicine and had some minor relief for two days, then the secretions returned. A friend called and asked, "What kind of secretions are you talking about?"

I started to be afraid. I had ulcerative colitis 25 years ago. I was miraculously healed in 1988. The symptoms I have been experiencing lately were exactly the same. I knew that parasites mimic the colitis symptoms, but in the back of my head there was a nagging fear.

I went to the doctor. He pushed on my belly in three places. Two of them hurt. I pointed to the two spots where it hurt and asked, "What's here?"

He said, "Your large intestine."

I was worried. He said to me, "Here's the address to a lab that specializes in jungle ailments. You'll need to drop off some specimens. When you get the results back, bring them to me."

So, I delivered three "specimens" at the lab. It's important to deliver your "specimen" while it's still hot. Parasites like a warm and moist environment. It was funny thinking about getting robbed on the bus, on the way to the lab. The robber would say, "Empty your pockets!"

"Well, OK, but be careful, because it's still hot."

I had to deliver my specimens to a very pretty, young lab technician. She was professional and didn't try to make chit-chat, when I handed her a warm cup in a plastic bag. I had to do it three times over a 5 day period. (One of my specimens arrived on Sunday afternoon, when the lab was closed.)

The good news? I don't have colitis; rather, salmonella and parasites! This may be one of the only times in history someone honestly said, "Thank God its parasites!"
Posted by Bill and Lena Shrader at 9:04 PM

Oh my! So not fun, but also relieved it's not colitis! Thanks for the update. :)

Despite your suffering, this made my day... especially the talk of specimens.