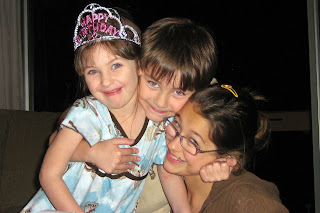 Abi's fourth birthday came, and we celebrated it in a lovely, low-key American birthday party, with just a couple little girlfriends and some good dress-up. I just happened to mention it to Abi's teacher, her "Miss," which is pronounced with a thick Spanish accent, "Mees." (At first I thought that this was some sort of word I didn't know yet, but then I realized that they were saying an English word-instead of señorita; they have anglicized it, and the teachers are the "Mees"es.) She seemed a little surprised that we hadn't done anything with Abi's classmates in school, but I didn't think any more about it; that is, until she asked me if maybe we could have a party for her at the school. My first thought was, "Bill will not like this at all," because Bill is a sort of traditional birthday minimalist, preferring to send the kids out to the backyard with a new stick to mark the passing of another year.

Now, something you need to know is that Lima, Peru is the Happy Birthday capital of the world, especially for those who have a little bit of dough to spend. It is very common for us to look out onto our little park and see rented tents and tableclothed, color-coordinated tables, a huge inflatable, and rented musicians, or just the music from High School Musical blared through a sound sytem. This is just for little kid parties, too. Abi attends a preschool with the priveleged, and therefore gets invited to some major parties, but we don't usually go, as they are normally at suppertime and it can get a little disruptive, not to mention expensive, to keep up her busy social calendar.

So, to make a long story short, we had a party at the school. But I had no clue as to what I had to bring. I had to ask the "Miss"--and very sheepishly--what all "having a party" entailed. When I showed up, it was clear that I didn't really get it, as she had to cue me on all the way to do things. I felt like the representative for the Birthday Party Burgeiosie. Totally clueless. I had no tablecloths, no clown. If it wasn't for the "Mees," I would have been up a creek. But at least my jello went over really big. Abi hid her face in her hands the whole while they sang to her, but clearly enjoyed all the attention, getting up to do a little jig to entertain her public now and then. As for the ballet class she normally takes on Fridays, that went by the wayside, because she couldn't wait to get home to check out the hall of new toys to play with. As we made our way out of the center, balancing all the party makings and Abi's gifts, her "Miss" said to me, "See, how happy she is?" I think at least one of us will adjust just fine to the Latin birthday haul. Oh..., I mean culture.
Posted by Lena Shrader at 10:48 PM