Below (in the entry entitled "Ciabatta Bread actually is better") you can read about my conversation with a guy who said that all religions are the same and that all missionaries are just salesmen trying to convince you that their product is better. The joke below displays effectively the notion that sometimes the guys who's trying to sell you something is telling the truth:

Reverend Ole was the pastor of the local Norwegian Lutheran Church, and Pastor Sven was the minister of the Swedish Covenant Church across the road.

I saw them yesterday standing by the road, pounding a sign into the ground, that reads:'Da End iss Near! Turn Yourself Aroundt Now! Before It's Too Late!'

As a car sped past them, the driver leaned out his window and yelled, 'Leave us alone, you religious nuts!'

From the curve we heard screeching tires and a big splash...

Rev. Ole turns to Pastor Sven and asks, 'Do ya tink maybe da sign should yust say 'Bridge Out'? 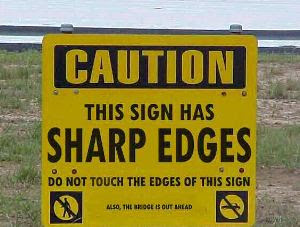 Email ThisBlogThis!Share to TwitterShare to FacebookShare to Pinterest
Labels: Devotions