Last Sunday was Father's Day. It was the anniversary of the last conversation I had with my dad. I couldn't be with him on that Father's Day, because we were preaching in a town on the western border of Kentucky. We took the camper with us, which was our final camping trip. I remember only snippets of that final conversation with my father. Mostly, we talked about camping and the importance of problem solving in life. Dad was alert and in a good mood. I cried at the end of the conversation, because it was so sweet and so uncommon given his failing health. I told him that we'd be back home on Tuesday night and that I'd be over on Wednesday morning to give him his Father's Day gift. My father died that Wednesday morning before I made it to their house. 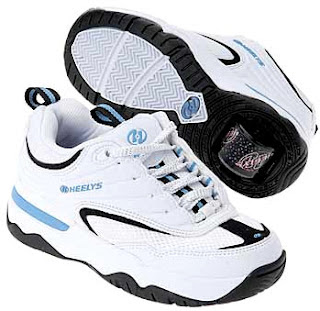 Father's Day, one year later, I find myself in a mall in Costa Rica. Colton's birthday was on Monday and we were desperately trying to find him a pair of "Heelys"--those shoes with the wheels in the heals. All the stores in Costa Rica are sold out of his size. I found myself getting more and more upset. We reached the end of our search and I sat down on a bench in despair. Lena asked me what I wanted and I burst into tears. I wanted my dad. The following 24 hours (i.e., Colton's birthday) were pretty rough. I couldn't stop crying. It's very hard to sit in a grammar class conjugating verbs when you're fighting back tears. People would ask how my Father's Day was and I responded by crying. It was a rough day. And, to make matters worse, I felt the need to be chipper and enthusiastic for my son. 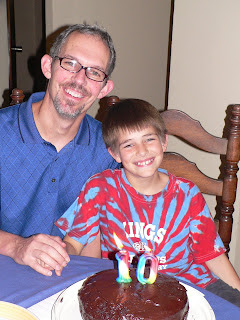 We spent the rest of that afternoon looking for Heelys, which we never found. We ended up eating a very late dinner at Tony Romas (the rib joint). The food was great, but our entire meal was absconded by Mormon missionaries who were trying to witness to us. As such, Colton's 10th birthday is not one that will be remembered fondly, but may afford us a few laughs in the future. Colton will be able to say, "That was the day dad drove around the city crying, looking for shoes that I never got, capped off by a Mormon who ignored all our social cues."
Tomorrow is the anniversary of my Dad's passing. I feel sad about it, but at the same time, I suspect that there's a strong chance it'll be an improvement.
Please pray for my mom, myself, Lena and the kids, and my siblings. We all feel the loss of my father deeply.
Posted by Bill and Lena Shrader at 11:36 PM

Email ThisBlogThis!Share to TwitterShare to FacebookShare to Pinterest
Labels: Life in Costa Rica, Memories of my father, Prayer Requests

Bill & Family - we miss you guys & we are praying for you & your extended family. We love you!

i'll be praying for you and your family. my dad died almost 8 years ago, and for the first couple of years the anniversary of his death would also hit me really hard.