I was in the market today and noticed as one of the vendors bowed her head to pray before she ate her lunch.  I was touched at her reverence, and asked her if she was a believer in Jesus.  I wasn’t really looking for a witnessing situation—just a moment to connect with a Jesus lover.
The conversation continued, and I asked if she was an evangelical believer.  She said no, but that she was a Christian.  I had never met people here before saying that they were Christian, but denying being an evangelical, apart from an occasional Catholic.  I asked her what she perceived the difference to be, and she informed me that she doesn’t sin anymore.
Really.
I told her that First John was a great book in the Bible, and that it says that he who says he is without sin is a liar, and the truth isn’t in him.  She looked shocked, and questioned my version of the Bible (just for the record, she was King James only, but in Spanish).  She was new to this path, but not very shaken by my challenging words, and invited me to come to her church so I could understand better.
I left my new friend, telling her that I wasn’t interested in an argument, and I encouraged her to get into the Book herself, so that she could start to sift things that are taught in regard to the true teachings of Christianity.  I was afraid to push her—I have heard stories of people starting out with the Jehovah’s Witnesses, or the Mormons, and becoming disillusioned when they realized that what they were learning was not true, and throw all of it out together.  I left a bit deflated, and angry that someone had routed a soul’s honest attempt to follow Christ as a repentant sinner.  Now she is “sinless.”  I feel sorry for her family and friends, who now have no way to speak into her life, as she is currently completely free of sin!
Peru is a minimally literate country.  Latin America in general is not a print-rich region of the world, but compared with the rest of Latin America, we fall toward the very bottom.  This creates vulnerability among our believers, because many of our brothers and sisters here have never read an entire book of the Bible---and I am talking about faithful ones!  These are the 20% who do all the work, lead the worship, and facilitate cell groups.  So what happens when a false teaching comes along?  The heresy sensors don’t go off, and the church is often fighting off bad teaching.


Bill and I are passionate about Peruvian believers becoming strong in the Word.  This is one of the reasons Bill is teaching in the seminary this year, even though it comes at a high cost in time and effort.  We need pastors and leaders who handle the Bible well and teach their people to read it and study it for themselves.  This is also a reason why I am doing an English conversation group based on the life of Christ aimed at university students (nonbelievers and believers combined).  We want to get people into the Word by all means possible until it penetrates—separating even the bone from the marrow.  It never fails to do the same for me! 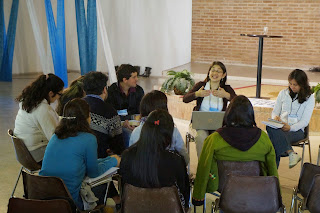 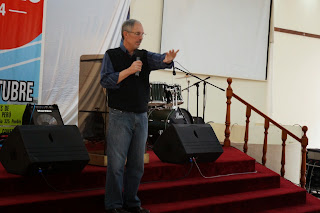 Bill giving our first pitch to Peruvian youth leaders on the importance of university ministry
Posted by Unknown at 7:43 PM