Eber 1 - The lame will leap 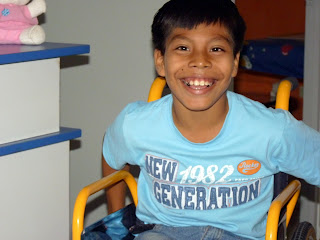 Eber is a Latin America ChildCare (LACC) child who lives in the Amazon jungle. He had meningitis as a baby, with a dangerously high fever. Surprisingly, it is a disease I (Bill) also had and which, for a time, left me paralyzed. By grace, I had excellent medical care and recovered. Eber’s story is different. Eber’s family did not have the money for medicine; so, they applied a poultice of jungle plants. Eber survived, but the disease left him crippled. His bones grew, but his muscles did not. The result was that his leg bones were bent, his knee-caps were in the wrong place, knee joints faced inward, and his flat feet faced outward. It was impossible to straighten his legs. Rather than walk, he hopped. The doctors said that if he did not receive surgery, the stress on his knees and hips would destroy them.
The schools in Eber’s jungle town rejected him, telling his mother that they were incapable of mainstreaming a disabled child. That’s when Pastor Fernando stepped in. He directs the LACC school in Eber’s town. He accepted Eber and asked LACC to help. Eber now has a sponsor who pays $32 per month so that Eber can learn to read and write, be discipled in Christ and have the hope of a future. Pastor Fernando’s eyes well up when he tells the story of how the kids in the school accepted Eber and how they help him. Now LACC is helping Eber to walk. Through the “extreme poverty fund,” LACC is paying for Eber to receive surgery. That’s where we come in (i.e., Bill, Lena and fellow missionary, Phyllis Rose). We brought Eber to Lima to receive surgery. The doctor had to stretch his legs out with plaster casts in order to make his muscles long enough to be detached and reconnected in different places. The knee caps had to be removed and reattached. The leg bones needed to be cut and straightened. And, his feet required complete reconstruction.
It also meant taking a crippled boy out of the jungle and flying him to Lima—a city of 9 million people.
To be continued …
Posted by Bill and Lena Shrader at 5:39 PM

Bill and Lena,
It is wonderful to hear about the work you and LACC is doing there!

Looking forward to long talks and lots of stories when you come home!

In His amazing grace,
Pia