A Tale of Two Histories 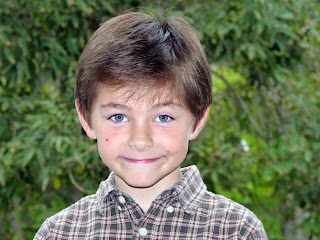 Willy, at age 7, is the budding Evangelist in the family. Recently, he was playing in the park and mentioned Jesus to his friend. The boy said, "Who is this Jesus guy you keep talking about?

Willy replied, "Don't you know Jesus? He's God. He made us and the world and everything!"

The boy responded, "God didn't make us. We came from monkeys and the big boom!"

Willy, never having heard of the big "boom," was as perplexed as his friend who had never heard of Jesus. Willy came home and told the rest of us, "That kid really needs to learn about Jesus, because he thinks we came from monkeys."

It's like Charles Dicken's "A Tale of Two Cities," in which the city was the same, it was the perspective of the people that was different. In this case, you don't have two "cities;" but rather, two "histories." THE original history is Willy's, who has been brought up to believe in a loving God who protects him and wants what is good for him. The fruit of that is that Willy is a generally happy kid. Why be afraid when God is on your side? The other history is that of the other boy, who was brought up to believe in unexplainable physical processes that have the power to create or destroy--entirely without love or reason. As such, the other little boy has a surly and cantankerous outlook. The explanation for where we come from shows on the faces of each child.

I'm proud of Willy for sharing about Jesus and, even though he climbs like a monkey, he didn't come from one. Below is a letter Willy wrote to Jesus, back when he was just starting the first grade. It reads, "Dear Jesus, Thank you for coming into my heart. Love, Will." Ironically, he spelled "heart" as "hert." If you pronounce it "hurt," it would be just as true. 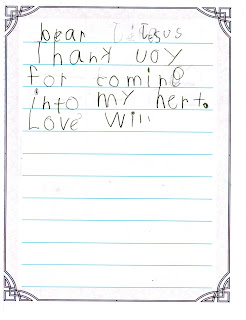 Posted by Bill and Lena Shrader at 1:33 PM