The Knife (or Tears in the Airport) 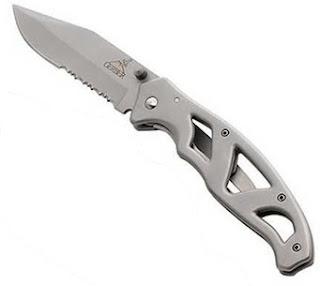 My dad died on June 21, 2006. The last time we had a good conversation was on June 18. It was Father’s day. Lena, the kids and I were driving to a church service in western Kentucky. We had our pop-up camper in tow and were planning on camping for a couple of days after the service. I had a great conversation with my dad, on the cell phone while driving to the service. We talked about camping and other things. He had been so sick that it was rare to have a good conversation with him. When it was over, I had tears in my eyes. I remember telling Lena that if it was the last conversation I had with him, that I was very grateful to have had it. One of the things I told him was that I had his Father’s day gift and that I would give it to him when I got back into town. He had asked me to get him a new pocket knife. He had arthritis and couldn’t close his old pocket knife. So, I went to Dick’s Sporting goods in Mason, Ohio, and (with the help of a great sales agent) tried every knife they had. The salesman and I both decided on a very cool Gerber knife. The locking mechanism was the smoothest we tried and very easy to close. I told my dad that we’d be back on Tuesday night and that I would come over on Wednesday morning to celebrate Father’s day. That Wednesday morning, I was awakened by an early phone call. My father had died.

I’ve carried that knife in my pocket nearly every day since. Even though my father never saw it, in my heart it was his knife. Whenever someone saw it, I told them the story. I travel a lot and have lost my share of knives in the airport. A few times I nearly lost “the knife” to airport security. Usually, I remember in time to stick it in my checked luggage. Today was not that day. I walked up to the X-Ray machine, reached into my pocket and felt the knife. My heart sank. I said a quick prayer, stuck it in my book bag and put the bag into the X-Ray machine. As the bag came out, I watched the security guard grab it. I knew he would have a hard time finding what he was looking for, so I opened the bag for him. He pulled out the knife, opened it, and held it over the acrylic disposal box. He looked at me for permission. I said, “OK,” and watched him drop it into the box. I grabbed my bag, walked about 5 steps from the counter and burst into tears.

I was surprised by how difficult it was. My emotions welled up within me—irrational and unholy. I felt like the Lord was stripping me, taking from me all that I have held onto. My father died just before we left for the mission field; so, emotionally, the loss of my father is intertwined with the other relationships and things we left behind. As the security guard dropped the knife into the box, I wanted to yell at him, as though he were the Lord, saying, “What do you want?! Do you want me to arrive at the temple completely naked?” (In my mind, the guard would have responded, “No sir—just the knife.”) It wouldn’t be bad if we did arrive at God’s house with nothing to hold onto but God himself. In one sense, we all walk through the Pearly Gates that way. In my head, I know that the knife was easily replaceable. But, the loss of it brought back all those emotions of loss.

The good news is that I’m probably not the first guy to cry after walking through security.

Posted by Bill and Lena Shrader at 8:50 AM

Email ThisBlogThis!Share to TwitterShare to FacebookShare to Pinterest
Labels: Grief, Life in Peru, Memories of my father

Oh my goodness. I'd be bawling too! And I didn't realize your dad died on the day Samuel was born. Wow.

I envision my reaction a little different--mine would be more...yelling at the guard, "Don't you know what that means to me?" And I am confident I would not be the first to be the emotionally hysterical female walking through security. This was kind of heart wrenching to read.

Kind of a sad story. Just think how God felt when he had to let go of his Son.

Your blog keeps getting better and better! Your older articles are not as good as newer ones you have a lot more creativity and originality now keep it up!

That was powerful. I am sorry that your loss was felt all over again. It reminded me of Eustace in the C. S. Lewis novel, Voyage of the Dawn Treader.

Hi Bill, this is such a moving story. I'm sorry you lost your dad's knife!

Bill, this brings back so many memories and tears for me. Bowling was a great passion of my family. I remember, since I was a little girl, being at the bowling ally every Saturday night throughout the school year when my parents played on a league. One year for Christmas, my sisters and I bought bowling balls for our parents. We were trying to sneak them into the house without them noticing their presents. My father died three days before Christmas. We went to return his present and my mom said to us “your father knew what he was getting from you.” I just want to say I understand. Donna